poetart is a unique website dedicated to those of you interested in reading more poetry, a lot more poetry and a lot more different! Brian’s poems cut right across the board, from humorous and deep, to sad and, no doubt, a little – or a lot – left of centre. When it comes to poetart absolutely anything goes: A modern twist on things for extra effect something he sees as utterly beneficial to the reader. The website acts as an outlet for people to come and visit so as to get away from the hassles or otherwise of everyday life. Right here you can find a poem, or a number of poems for that matter, that suits your particular taste in reading; a poem with the absolute right kind of magic running right through it really can mean the world to a particular someone if appreciated to the fullest extent. Above all else, poetart looks to make poetry that little bit ‘cooler’ and far more acceptable, it’s ultimate goal being to give poetry back to the people.

“Sure my punctuation is a little askew, the flow tending to my own style, but here’s to hoping and praying that enough of you get it. Sometimes the rules, while unmatched in their supposed correctness of course, can actually turn a writer into a literary robot – adhere to something which doesn’t quite feel so correct to you per se, and the whole thing will unintentionally unravel like hell on hot wheels. There are enough writers out there who have gone against the grain by now for me to truly see that writing – good, good writing – is absolutely an art form. It can and always should be making a grandiose gesture in attempting to transcend things, to beat outside the box and to make the reader think to enjoy it all the more. It is irritating this particular form, simply because there are no brushstrokes, no colours in the first instance. The colours come from the bridged collaboration between writer and reader, and we have no real way of knowing how a million different minds tend to taking to creatively working. So yeah, our ability to play out aforementioned punctuation and what not in our own suitably comforting style is utmost important to me. That has to be our peculiar brushstroke searching for insatiable colour. I just wish I could finally wholeheartedly convince myself that I am doing this solely because it is my requisite tool and rather not because I am excusing myself owing to an inability to adhere to said exactitude and, in my opinion at least, inhibiting rules of writing in one manner or other. Which came first, the chicken or the egg? I just don’t quite know if it is my stickler approach or if, in fact, the reader doesn’t think about it like this in the first place and would far prefer not to have to be an A-student in English grammar. I’m fairly sure I could be one if I wanted… maybe, but where’s the fun in losing myself aside a style that seems to work for me so far? I’m fairly odd, I see that. I dream in poems – the detailed construction, the nonstop meticulousness of my own stylised approach, and who am I to ever question my dream’s particular quest. A dream’s a dream’s a dream. Plus, I want to speak these words-cum-stories of mine to people, to not have them stuck gathering boredom on a colourless, lifeless page, so that’s when it will all boil down to breaths and elongated pauses and so forth. No punctuation can ever get that spot on, can it though? It’s too open-ended. There has to be a reason why Bukowski loathed the ‘rules’ – and I am seeing more and more by the day that it wasn’t his inability to keep up but rather perhaps grammars own inability to renew itself and to transcend with the times. He transcended like crazy. Literally. If I’m to remain a subtle stickler for now then that will have to do just fine. Or I might just be the greatest stickler/pretender. I also realise one million per cent how odd it is for an unknown writer to sign their website name to what can only really be perceived as a bat-shit, albeit nonetheless self-important statement, but it was always all-in our nothing. To me every single thing, a person’s next sudden glorious movement, is a possible poem. I’m meticulous.” – poetart 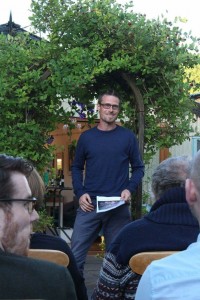 Brian studied journalism at Griffith College Dublin, where he graduated with a B.A. in Visual Arts & Media Communication. Since then he has worked in radio hosting ‘The JagerCast’, sponsored by Jagermeister and run by former 2FM disc-jockey Dusty Rhodes of Digital Audio studios – the very first man to reach over one-hundred-thousand listeners in Ireland; in print as an intern at ‘The Sunday World’, as well as inside of the lofty art world having had a short-story titled ‘Howard’s Way’ in collaboration with New York-based Irish artist Tamara McCarthy showcased at the popular art exhibition that is FTLO (For the Love of) at Mill Studios, Dublin. This is an exhibition run by graphic designers/artists Shane O’ Driscoll and Ivor Noyek. As well as this he has had another short story titled ‘Charlie’ in collaboration with Dublin artist Kerry O’ Hare showcased at ‘The Little Ghost Gallery’, Kilkenny, an exhibition run by Irish artist extraordinaire Mick Minogue. Brian has also written for Dublin magazines ‘Cheers’ and ‘Town & Village’ and his college magazine Griffiti. One such contribution to Dublin-based online magazine ‘Le Cool’ occured a few years back, wherein he wrote a heady review regarding the popular ‘Jimmy Hendrix Experience’ at St. Stephen’s Green Shopping Centre, Dublin.

To date, Brian has had his poems published in all five issues of HeadSpace magazine, one such publication in collaboration with The Twilight Programme at St. Patrick’s Mental Health Hospital. Dime Zine is another such magazine where a poem of his has come to striking light. As a matter of fact, this magazine turned out to publish his very first poem, titled ‘Desperate Times, Desperate Measures’. The other magazine in which he has been showcased is the Daydreamer Zine. He has also taken to selling poems as rare personalised gifts to people to give to their loved-ones, a rather impressive number of poems presently taking framed pride of place inside the homes of aforementioned people. He has been invited to read his poems at The Twisted Pepper and Sweeney’s in Dublin as a HeadSpace Magazine contributor (a magazine where at a later date he would be asked to become co-editor of and a title he later relinquished owing to unfortunate locational circumstances), as well as three such Bandon Engage Festivals of 2013 and 2014 and 2016 to overwhelming response. The first was in collaboration with photographer Martha Clarke, the following event with Bandon born singer/songwriter Mervyn Love. The 2016 event took place at Bandon library, wherein he performed with stellar Whippet Snippet storyteller extraordinaire Rae Kinlay. He is extremely proud in realising as time wares on that his reputation has been solidly creating a stance for itself owing to his hometown’s unwavering support. Brian has performed at the Psoken Wrod poetry night at the famous music venue De Barras in Clonakilty and, what’s more, to terrific acclaim at the Transatlantic Connections Conference 3 2016 in Bundoran, Co. Donegal at the Atlantic Apartotel. This is also another heady event which he has had the privilege of being invited back to perform at again come January 2017. The Catholic church has even invited him to create and perform a poem in coherence with their annual play in his home town of Bandon, the incredible drama teacher and all-round lover of the written word, Sir Alphonsus, having as a result become a sturdy supporter of his writing. He was also overwhelmed to have been recently asked to perform a poem titled ‘The Impression Maker’ which he created especially in honour of the effervescent and extremely popular Cathal Murphy, a childhood local friend who heartbreakingly lost his own life over in Canada, at the very same church – this, to date and quite possibly for good, one of his undeniably greatest achievements in his opinion.

Brian can often be found-out reading his poems on a fairly regular basis and presently performs with ‘The Gab’, an up-and-coming seriously influential storytellers event. On the more commercial side of things, namely businesses, he has been commissioned to date, to name but a few, to create poems for the effervescent Inchydoney Lodge & Spa, popular Bandon haunt Warren Allen Coffee Shop, ‘The Poet’s Corner Cafe’ in Kinsale, LA MODA Hair Salon, Sin-E Public House, Cork City, and the Courtmacsherry Harbour Lifeboat RNLI crew… and is currently creating more poems for both businesses and people. Many more poems will surely be created that he will happily tell you about regards meeting the owners and processing their personalised poems. Brian has worked in a number of Dublin and Cork nightspots as a barman, while also having worked on commission in the journalistic sense. He was honoured to have been chosen as the Cork-based blogger for The Samsung Night Run in 2015. He lived in Dublin for a grand total of ten years, and while his true love would have to be of fictional writing, primarily for him to one day publish a book of said fiction, it was only in the last five years that Brian took to writing poetry – he is still trying to figure a looser and more inviting term whereby to tag his writing. Some have coined ‘rhythmic storyteller’ as a possibility. He likes the invested term ‘wordsmith’ and hopes to one day earn that title.

Brian, the face of poetart, enjoys running in his off-time to keep fit, playing the odd game of adored football, socialising, etc. Nothing so unusual there, everything he then seems to be saving for the page! Meeting with people is a must for him, conversations proving to be a poem-starter when least expected. He also likes to take time out in grabbing himself a vanilla latte while getting to watch the world walk on by. All in the name of his rhythmic wordsmith nature of course. So watch out, you may just turn out to be the next person smack bang in the middle of his firing line.

The poems vary greatly in theme. Descriptive poems about normal people, things going on about the place on a day-to-day basis, so don’t rule out sensationalism for extra fabricated effect. Bottom line is this, truth absolutely runs the core, Brian looking to speak as openly as possible about everything everyone has ever had to deal with, be it good or otherwise. He likes to rhyme for the most part – intelligent rhyme – but has also recently grown more prone to dropping the rhythm when needs be. The high hopes of someone coming to him one day in telling him that one of his poems went about changing their outlook on life has thankfully happened which pleases him to no end. Put under fierce pressure he performs best. He takes his influences from the likes of hardworking musicians, artists, etc. and admits to not yet having unearthed a writer or a book that he truly admires, however Charles Bukowski is nudging all of the more into his conscience as he continues on. His poems are undoubtedly contemporary in style and workshops at secondary and primary schools are the next port of call for him. Brian looks for the characters sprinting within his long line of poems to be the Everyman type and for them to appeal to this generation of readers. He might just be what you might refer to as “an underground sensation” in the literary world – yet to be picked up by the collar and dropped tantalisingly into that awaiting world. A bold statement, perhaps, but one that many are in growing agreement with.

At present, the price for a commissioned poem stands at E200. Hope to see you soon –