‘Perfection Will Kill It’ 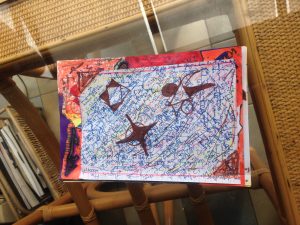 A smile and she takes her favourite, secondary self away from all of the thunderous rounds of sudden applause and predominantly pauses for a sip of dry white wine

Right by where the squared-off corner belongs, where meandering people tend to be less interested in anything other than themselves anymore
Like watching paint dry… it’s a terrible love and she’s walking with spiders

These Art gallery people have been snidely, silently witnessing and conscientiously watching and obviously sneering, but, still, she will continue on no less interested in this haphazard and decidedly plagiarised thing

It has been none too softly singing inside of her midst the tiniest of tiny violins, oft than not stinging at the parts where everything begs to make singular sense of itself again

These high-wired, flighty, introspective conversational dins appear to be all about the high ‘n’ mighty, yet it just is not for her prioritised mind anymore

Most great artist’s will have to open up the far more monstrous and beating, breathing pieces of their comfortably uncomfortable minds

Oft than not ear-achingly uncontrollable and eating away at their interior design
Perhaps too weak, caressed by the touch of creative kindness

Yet, the strenuous feedback has to remain to be an eagle-eyed necessity of invested sorts
The foothold, footnote, for neither happiness or destruction

A beautifully bedraggled and beguiling in-between

Her bare-naked, multi-coloured, -enthused canvas stands lonely and alone: predisposed to causing her over-utilised brain to bleed right by the trembling bleed and like tasteless crazy

Of unasked for yet equally paralysing reasoning